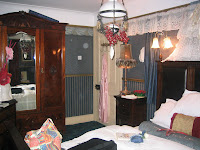 What a great day...wasn't sure if I could make it but luckily for me I was able to come. Arrived Friday late morning and Hotel West Cork was booked out but I found the most amazing B & B in Bridge House....Oh my God...am I lucky that West Cork Hotel was booked out. Bridge House is not like any B & B you have ever seen. Eccentric to say the least....Mona Best is the most lovable and welcoming person you can think off. Entering my room, I felt set back about 150 years and I say that with the most affectionate love. I remember my great grandmothers living room with its big and tall grandfather clock ticking away....I was happy.
Went straight to Cork West Hotel where the 'Story of the soil and sea' took pl 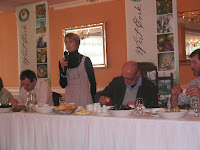 ace. What a delight. The day was split into three parts.I missed the morning session due to traffic coming from Cork but I made it in plenty of time for the lunch session. Paul Johnson and Bill Hogan were the guest speakers. If you have ever met Bill Hogan - and I was lucky to have met him about 2 years ago - you will know that he is passionate about his trade and food politics. He is an amazing character, having worked with Martin Luther King and learned his trade from traditional cheese makers in Switzerland and it is always a delight to listen to him.

Paul Johnson is also a great guy to listen to. He is original from England, son to an Irish mother - lovely woman by the way (she attended the event as well) and he is so much into his way of rearing the rare breed of Dexter cows that it is a delight to listen to him. He is playing Lyric FM to his cows.....doesn't that ensure happy cows and tender and wonderful beef (hope you join us for the tour Sunday next).

The evening session was devoted to cakes. Jean Domican from Buns 'n Stuff told us about her beginnings and how Farmers Markets are the right way to go to get direct feedback from customers and see what product goes and which one should be left in the drawer.
Then Diarmuid O Drisceoil made sure that I had some more laughter lines as he gave the most entertaining and informative talk. He spoke about his childhood and summers in Cape Clear with his 2 uncles (you should hear his story about the mackerel and the cat). Everybody in the room was in bits. After we all calmed down again, Diane Curtin launched the West Cork Foodmap. This map was designed to bring food and local produce closer to schools, supermarkets etc.
Ivan McCutcheon (columnist at the Southern Star) gave a presentation about his blog where he talks about people behind the products.
After all that, I was looking forward to the wine tasting in the Food & Wine Market. More about that later....
Posted by Elke at 14:29
Labels: Foodie News, Market News

Hi Elka, i must say the bedroom looks hilarious

Yeah...the B&B was hilarious but in a very good way. I love these kind of eccentric things and people. I can only recommend Mona Best and her B&B